The Wand of Fire is one of the three attacks wands you can craft once you've researched the Unified Thaumic Field Theory. It allows you to set mobs on fire (though it won't set fire to nearby blocks).

The Wand of Fire is necessary to craft the Pickaxe of the Core. It is also useful for dealing large amounts of damage to foes. Wow!

"You have successfully adapted the enchantment on an apprentice wand. It is now capable of sending forth a cone of elemental fire, burning all in its wake.

However the wand has lost the ability to renew its charge and will eventually run out of energy and break." 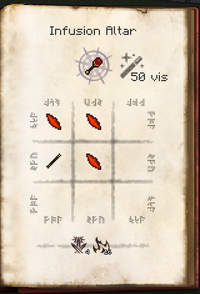 A Wand of Fire requires 3 Fire Shards and 1 Wand of the Apprentice to be crafted in an Infusion Altar.


Video of Wand Of Fire[]