There is currently a bug with 3.0.1c that causes servers to occasionly not save their auras properly.

The Aura is an intangible field of magical energy that exists almost everywhere. The magical energy of the Aura is known as "Vis" (pronounced "vee", as made very clear by Azanor, the creator of the mod), and it is the primary fuel for a thaumaturge's magic. A thaumaturge drains Vis from the Aura to conjure mystical objects from a Crucible and to infuse artifacts with magical power. Many thaumic devices must also drain Vis from the Aura to function.

Depleting the Aura of Vis, whether actively or through the passive functioning of thaumic devices, is not without risk. A depleted Aura will seek to recover the Vis it has lost, but it will accumulate a dangerous mystical instability in the process: Flux.

There is no way for the thaumaturge to remove this Flux once it has accumulated; the Aura must do so naturally. The Aura discharges Flux by "spending" it on the creation of random and often-dangerous magical effects, such as spawning Wisps or causing thunderstorms. The wise thaumaturge both monitors and limits the amount of Flux he or she is generating in the local Aura.

The Aura does not suffuse the planet equally and in all places. Instead, the Aura originates in and radiates out from "Aura Nodes": concentrations of Vis that are scattered throughout the world. Each Aura Node is different, varying both in type and in the amount of Vis it holds. 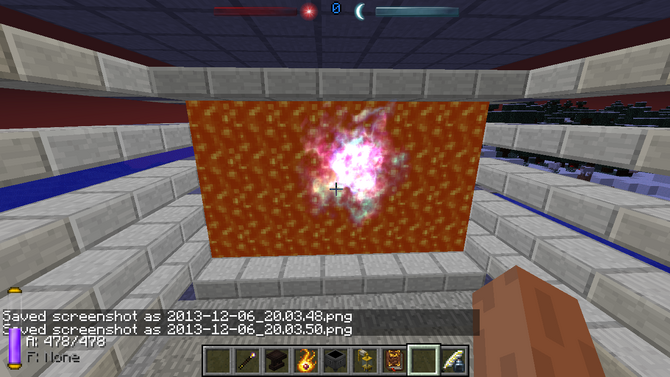 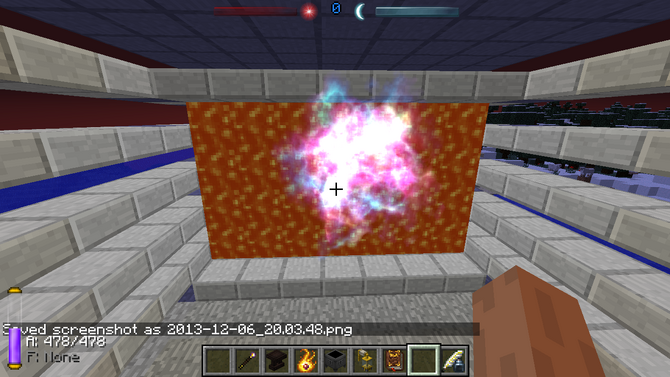 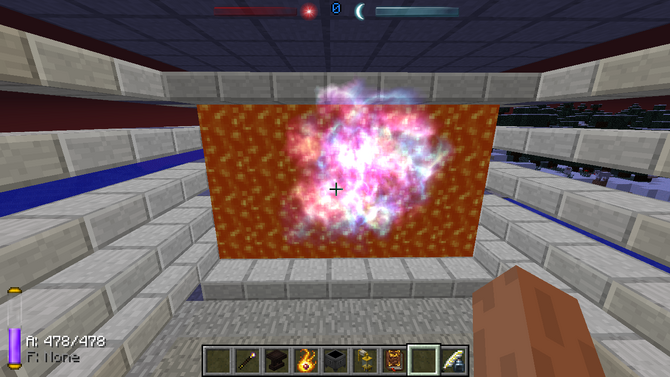 There are four different types of Aura Nodes, each easily distinguishable by appearance:

(Note: Pure and Unstable Nodes are easy to mistake for each other. The Pure Node's special effect has straight lines, while the Unstable Node's effect is like the Dark Node's effect, just without the dark color.)

As a thaumaturge draws Vis from an Aura Node, the depleted node will seek to recover the Vis it has lost. There are two primary methods by which an Aura Node naturally recovers its supply of Vis:

Note that none of these methods involves creating new Vis, simply redistributing it. Hypothetically, if no preventative measures are taken, extreme overuse can completely deplete the Vis from a region rendering thaumaturgy impossible.

Each Aura Node directly supplies the Aura only out to a certain range. The range of any Aura Node is equal to one-quarter of the maximum Vis it can hold:

There are two important consequences to the limited range of Aura Nodes:

As a result of the finite range of Aura Nodes, there exist rare places in the world where there is no Aura, because no Aura Node is sufficiently close. In these places, the Aura can neither be felt nor tapped into by the thaumaturge: Wands will not recharge; the Goggles of Revealing will show nothing; Silverwood Saplings will not grow; and many thaumic devices will not function.

The practice of thaumaturgy is rendered all but impossible in a Dead Zone. Any endeavouring thaumaturge would be well-advised to relocate to a more mystically-fruitful area.

The Goggles of Revealing provide the thaumaturge with important information on the state of the Aura. However, the Goggles are flawed in a subtle yet significant way: They reveal the closest Aura Node, even if that Aura Node is too small to be in range. This quirk should be on the mind of every thaumaturge, as it has the potential to obscure from your sight those Aura Nodes that are in range—the ones bearing the consequences of your thaumaturgy.

If the above applies to you, know that your Goggles cannot be trusted while you are working in your lab. You will see an Aura that doesn't change and Flux that doesn't accumulate no matter what you do, because the smaller, closer Aura Node is obscuring those Aura Node(s) actually impacted by your thaumaturgy. Be sure to locate these relevant Nodes by exploring the area around your laboratory. Then, by using the range equation above or by observing their levels of Vis and Flux, determine which Nodes are providing the Vis for your thaumaturgy. These are the Aura Nodes you must monitor, by traveling to them on a regular basis: When it comes to Flux, ignorance is not bliss.

A Note on Silverwood Trees: It is easy to inadvertently cause this problem by creating a new Aura Node from a freshly-planted Silverwood Tree. Such Aura Nodes are quite small, with a very short range. If this range isn't sufficient to cover your lab, it will be the only Node shown by your Goggles of Revealing... but it won't be the Node suffering the effects of your thaumaturgy.

Nodes that are very close to each other will gravitate towards each other until they come into contact, then they will fuse together creating a new node. They do this when the distance squared is less than the average of the current aura levels in the two nodes. The new node will be of the same type as the parent node with the highest current level of vis at the time of the merge and will have a max capacity equal to the base max of the node with the higher current vis plus 1/3 of the max vis of the node with the lower current vis.  When fusing, the nodes create a medium amount of flux.

Since Silverwood Trees can produce Nodes, it's theoretically possible to create an infinitely powerful node given a supply of saplings.

Since merge distance is based on current aura levels, you have to plan out how far the new node will be to guarantee that the older node will have recovered enough to be considered the larger node. Generally a distance of 11 blocks will do as the new node cannot be bigger than 100 thus having a merge range of 10.

The lowest current aura level to be completely safe from this effect is 251, which guarantees that your larger node will always be the main contributor to the new merged node's max aura. Node range is .25 times the current aura level, so to get a Silverwood Tree to grow you need a node that covers the sapling and has enough aura.[1]

Because nodes take on the type of the largest current node, it is possible to create a Pure Node bigger than a dark node and then Chain Link it towards the Dark Node. The two nodes should eventually fuse together, and it will become an incredibly powerful Pure Node.

When two nodes merge, the resulting node tends to be somewhere between where the two nodes were. This means it's possible to move a node by "chain linking" the target node. This is done by growing Pure Nodes from Silverwood Saplings. The saplings must be planted one at a time, somewhere between 2-5 blocks away from the node you want to move in the direction you want it to move. This is useful for moving nodes to create an all-powerful Super Node for your base, or for moving Dark Nodes, or moving a Pure Node towards a Dark Node to destroy the Dark Node.