When you decide to finally start crafting an army of servants, the first step on your journey is to craft the basic Golem Upgrades. These are fairly simple and inexpensive to craft, which is good because you will most likely need a lot of them. Once you have crafted one you simply place the Golem Upgrade of your choice in the "head" position of the golem and craft.

There are five different kinds of Golem Upgrades; Standard, Smart, Fast, Strong, Perceptive. Each of these cores will allow the golem to perform a bit better, or differently. Each of these variations should be listed on the wikipage for each of the golems, take care when choosing which core to craft as different cores may have significant differences to the performance of the individual golem.

By crafting a Golem Upgrade

and combining it with raw materials that form the bulk of the golems body, you can create small servants that do your bidding.

This item unlocks with the research: Golemancy. The Aspects depend on which Core you're researching.

Note: It also requires you to have already researched Nitor. 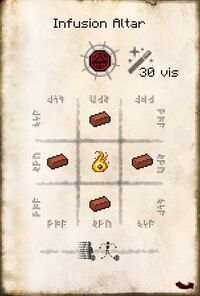 Upgraded Golem Cores can be researched that give the Golem greater Intelligence, Speed, Strength or Perception. These are crafted in the Infusion Altar with a basic Golem Animation Core and a shard. The upgraded cores can only be used in the creation of new golems. Existing golems cannot be upgraded with them.

This Core is crafted with a Golem Animation Core and a Water Shard in the Infusion Altar. It requires 12 Visum and 20 vis.ass

Golems with this core have a much larger perceptive range, allowing them to traverse larger distances to perform their tasks, or see things they would not normally be able to.

Golems with this core can carry twice as much and inflict more damage, depending on how you use them. It is crafted with a Golem Animation Core and a Earth Shard while also requiring 12 Potentia and 20 Vis

Golems created with this core are able to carry twice as much as they normally would, or inflict greater damage

Golems with this core can move faster than other golems without this core. It is crafted with a Golem Animation Core and an Air Shard while also requring 12 Motus and 20 Vis.