If 3 or 4 have an enchantment, the bore will mimic it while working.

It will automatically mine up to 64 blocks in the direction you have aimed it (this you can change with any Wand by right-clicking on the side you want it on). The depth and the radius can be changed through enchantments of the Wand or the Pickaxe. The results will come out in the chest. You need to give the Bore Base a redstone signal that starts it. You can also set up an arcane bore above and under the arcane base so you can dig down and right of it (see picture below). It's also possible to set up 2 arcane bases and up to 4 arcane bores next to each other to dig in 2 directions twice as fast.

NOTE: It's not a good thing to mine up, because you can hit lava and your bore will burn away!

"You have discovered some amazing mining tools like the wand of excavation and the elemental pickaxe, yet they do not provide an easy means of mining vast areas without your manual intervention.

It is time you changed this and you think you might have found an arcane machine that can do this.

You have discovered a device capable of extending the range and power of a wand of excavation. Of even greater use is the fact that the machine can do so without your constant supervision.

You merely need to place it on a specially constructed base, point it in the right direction with a casting wand and apply a redstone signal.

The arcane bore requires three things to function. The first is a wand of excavation placed in its leftmost inventory slot.

Any enchantments applied to the wand will also alter the functions of the bore. The wand will lose durability as it would when used to mine manually.

Secondly you need to place any kind of pickaxe into the rightmost slot. The material of the pickaxe will have little effect on the operation of the bore, but the greater its durability, the longer it will last.

Like the wand, any enchantments or special abilities of the pickaxe will also be applied to whatever the bore mines.

Lastly the bore will require vis to operate. Quite a lot of vis in fact. An arcane bore can only be placed on the top or bottom of the arcane bore base.

Any items mined will be ejected from the base in the direction its nozzle is pointing. It will eject into an inventory if possible. This direction can be changed with a wand."

Research available after The Theory of Everything. 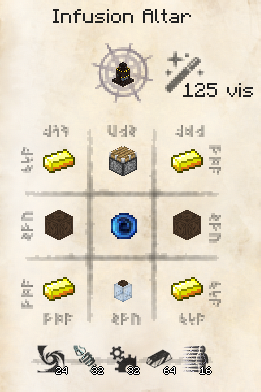 You can craft it in an Infusion Altar with 1 Portable Hole, 1 Warded Jar, 2 Arcane Wood Blocks, 4 Gold Ingots and 1 Piston. 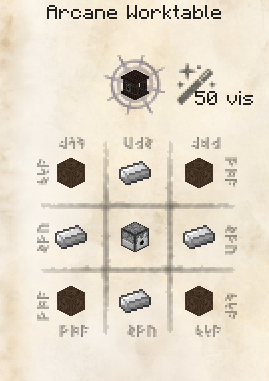 You can craft it in an Infusion Altar or Arcane Worktable with 1 Dispenser, 4 Iron Ingots and 4 Arcane Wood Blocks.