Alumentum is the magical version of TNT. It's easier to produce than TNT, because you don't need gunpowder

for it, but therefore you have a smaller explosion radius.

When thrown, it will go approximately 4 blocks, so make sure you are far enough away. As soon as it hits a solid surface or a entity, it will explode and destroy blocks in a 3x3 area. Due to randomness in the explosion code, the explosion can be a little bit bigger. This explosion can cause up to 20 damage. The nearer you are to it, the more damage you will receive. The same goes for monsters, animals, etc.

Alumentum is a throwable item, so you can't launch it with redstone.

NOTE: If you have "/gamerule mobGriefing false" then there is no block damage because it's handled like an entity! But it still damages mobs and players.

Produce a lot of it before a PVP battle; you can easily damage the opponent and destroy his fortress.

If you don't want to take damage from Alumentum, you could use it while you jump, and throw it on the block under you. You can do thaan smelt 32 items.

"This substance throbs with fiery energy and it is more than eager to release that energy at the slightest bump. It may be unstable, but it would probably make a good source of fuel." 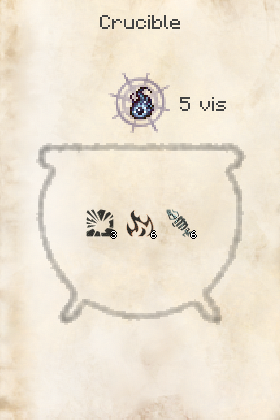 You can get it in a Crucible with the Essentia below.