The Advanced Thaumostatic Magnetizer is a machine added by Thaumic Tinkerer.

It's main purpose is to push or pull mobs or items.

NOTE: The range of the push/pull effect is changed by the strength of redstone signal. stronger=further, weaker=nearby.

It is especially useful in Mob Grinders.

If you want one mobtyp only be pulled/pushed use the Soul Mould (recipe below) to get a pattern of that mob and put it in the Magnetizer.

"By tinkerering with the Thuamostatic Magnetizer you think you can apply the knowledge of moving matter in space to the flesh and make the field more accurate in its effect.

This block acts as a magnet, it's state can be changed by right clicking it. While in south (blue) mode, it'll pull any nearby mobs towards it. While in north (red) mode, it'll do the opposite. Furthermore, the range of this attraction, or repulsion, is determined by the strength of the redstone signal applied to it.

With the new function of the magnetizer, you have created a filtering system for the Advanced Magnetizer.

Using a new device you have created you can Right-Click on a mob to take a copy of its magnetic signature and then use this to make the magnetizer affect only that mob. 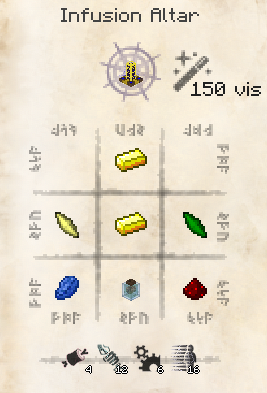 You can craft it in a Infusion Altar with 1 Air Shard, 1 Earth Shard, 2 Gold Ingots, 1 Brain in the Jar, 1 Lapis Lazuli and 1 Redstone.

Retrieved from "https://thaumcraft-3.fandom.com/wiki/Advanced_Thaumostatic_Magnetizer?oldid=28580"
Community content is available under CC-BY-SA unless otherwise noted.